a novel by Doukas Kapantaïs

In the midst of the junta of the politically correct,
the slightest cry of bestiality a humanitarian breeze.
Doukas Kapantaïs

A young boy is forced to rape his mother in front of an audience because she slept with another woman. Parents take their children to educational parks in order for them to apprehend what a rewarding thing violence is. The Empress has a taste for retarded slave girls, which, after abusing, slaughters by knife.

It very much looks like that the only sane people left upon this planet are the Emperor and his hi-counselor. So, no wonder that the Emperor is at present overthrown and the hi-counselor imprisoned, awaiting for his own execution. Rumors are that the belated imperial cousin –also referred to as “the human vomit”– has risen to power by the aid of the Empress herself.

Will virtue be ultimately extinct or will, once again, sanity and goodness prevail?

Now, speaking of “goodness” and its opposite… Is anyone, within the novel, certain what these damned things are? And what if we (we, people on this earth) have been fooled by some specific form of corruptness and baseness that has been masquerading as virtue all along? And If we have indeed been fooled, which one is the “virtue” putting on the charade? Our own, or the one of this faraway planet? And who are “we”?

Excerpt from ch.2: “The Sealing Ritual”

Brother and sister watching the “Sealing Ritual” through a keyhole while their parents watch it from inside the room.

It was obvious that preparations for the ceremony were well under way. The council of physicians kept adjusting the systems. A little higher, a little lower, something tightening, something loosening. For example: a doctor that was looking at the screen calls someone else and shows him something, then that someone goes back to the woman and moves some levers. Small details like that. All of them. I suspect, however, that the doctors had already extended the whole procedure far beyond what was necessary. They might have been told as much by the director, or they just might have wanted to prolong as far as possible the unprecedented celebrity they were miraculously enjoying. Or even, perhaps, they were simply enjoying to the fullest their “scientific” involvement. In support of this last theory, I put it to you that many of them, but of the nurses as well –I honestly cannot tell who was taking the initiative here– once they would approach their colleagues, they would always, and under the pretext of “their work”, brush up against one another, always rub against one another, discreetly, to be sure, but inappropriately, always caress one another, always provoke one another. I can almost see them, even now from within this prison... A doctor, standing side-by-side with the nurse, over the victim’s taut behind, pseudo-scientifically discussing angles. The nurse touches the doctor’s crotch with the dorsum of her hand. Another woman, also a nurse, punctures the victim’s thighs and breasts with a sharp instrument, pretending to cooperate with the doctor on the computer, while he, the doctor, pretends to be giving instructions. Not in the least! The doctor was focused on other things. Afterwards, the nurse shifts from puncturing to nurturing and massaging, and once again, from the top… At some point, she begins hitting her, (discreetly, to be sure, but hitting her). This, until another “colleague” gestures that she is taking it too far, by which time she starts walking away, occasionally looking at her dossier and running off to another doctor so as to analyze what she was pretending to read. I bet the dossier was empty. Another nurse, probably the head nurse, whispers something into the bound woman’s ear, and then spits on her neck.

All this went on and on for about ten minutes. Successive cuts: to the spectators on the stands; to the guests on the sofa; to the set.

The criminal’s son was himself also immobilized by another guard. The presenter could finally be heard. From the corner of his eye he was watching up at some coded signals from the High Priestess’s elevated cubicle. Following these, apparently, he launched another ad break. The second one in this evening.

You have certainly realized, gentlemen, that Julia was far from stupid. You have certainly realized that Julia was far from cowardly. She per se was not feeling awkward at all. She did however sense my own awkwardness and didn’t mean to make it any worse for any reason. So, as long as that intermission lasted (no more than five minutes –regardless of the fact that they seemed like centuries to me), so, as long as that intermission lasted, Julia kept touching me at the exact same point over my pants. This time though, she was moving just one finger; her thump. Just the thumb, up and down and at great speed; nervously, compulsively, rapidly. No, she was not pleasing me this time. She was merely using this nervous tick in order to release some of the awkwardness. Of my awkwardness, to be sure, but of her own as well. This happens quite often, as you might happen to know gentlemen, this happens quite often with bright and sensitive people. Especially girls. Sometimes they look cowardly, and they do indeed behave with a cowardly manner. At times, they look afraid. Afraid they are indeed, but not for themselves. At times, they look ashamed. Yes, ashamed they feel, but not of themselves. They are ashamed of others. They are ashamed of us. It is our own awkwardness, our own feel of shame, our own fear and guilt that turns them awkward, fearful, ashamed. It is our own pathetic negligence, our own sad refusal to rise to the occasion. They sense it and they don’t want to burden us with their pity, or at least they don’t want us to realize how sad we look.

Oh, sweet brother, are you really not getting it?... Are you really not getting any of it? They are scared, sweet brother, that he might kill his own mommy… They are scared that he might beat her to death. His own mommy,… can you imagine? They are scared that he is going to beat her to death. And then how will they show the whooole world what a bad, bad, bad mommy she is?... Well? You tell me. How can they show that then? Shouldn’t sweet brother, I am asking you, should not the little boy do the thing he has to deep and nice, and shouldn’t she herself take pleasure in what the little boy does to her, so that the whooole world can see what a bad, bad mommy she is? Oh, dear, do I have to tell you everything? You have two years on me…

At this point, Julia turned completely (she was no longer peering through the keyhole), crossed one leg over both of mine, hugged me at my side squeezed me with all her girly might and so whispered somewhere between the ear and the neck:

— The entire, I am telling you, the entire world should see what a bad, bad, bad mommy this one is, doing such bad, bad things with other mommies. Not like our mommy, who is so typical. Our mommy doesn’t like, doesn’t like,... oh, what is it those hoodlums at school call it?... oh yes, our mommy doesn’t like… “cunt”. Isn’t it so, sweet brother? Well now, my own cunt is quite another thing. Quite another thing. This is her daughter’s cunt. Seeing as how I am her daughter and all, it doesn’t matter that she gives it a rub now and then when I am in the bathroom, does it? It doesn’t matter if she rubs me that way… And then, when she dries me out, when she gives it a second cleaning with her tongue, to…, to… Oh, what is it she calls that again? What is it? Oh, right, to “clean it through and through, inside out”. That’s how she calls it. That’s ok, sweet brother, isn’t it? That is ok. Isn’t it? No foul play there. It’s allowed. Honest. This is allowed.

I had sworn not to be caught off guard again that night. After avoiding fainting with some considerable difficulty (I really felt I was melting), I pushed her hand away and barely managed to let out a strict:

She wasn’t even minimally annoyed by my –least I can call it– petty behaviour. On the contrary, she appeared to be enjoying it. She looked at me as if she was looking at some puppy. She found me amusing. Oh, yes, I was a puppet for her to toy with.

— Now, now, it’s ok, don’t be like that. No hands, see? Sine manus. But I am not employing my hands any more. Honest. See? You, you must be right, sweet brother of mine. You, you are always right. I have been running my mouth silly. It must have been a phantasy or… some kind of dream I saw. No, no; definitely not! Mommy has never licked me down there. Never licked me down there. Well,… not all the way in, I mean. And, you know, not even after she showers me and I am smelling like heaven. Not even then. All the way in? No. Never! Nor does she ever put her fingers in. At least not as deep as to get…, oh, what is it that she calls it…, what is it she calls it…, to…, to… get “all of my cream out”. No. No! No! No!  Our mommy never does such bad, bad things to me. So you see. No reason for you to be worried. No reason at all. You won’t someday,… you will never have to… Well, you see what I mean, don’t you? You will never have to… like this poor little fellow on the screen… You will never have to…

That was all I could say before passing out.

I woke up on a cloud. Spinning. On a spinning cloud we woke up. That is where the rest of our night played out, gentlemen. Two spinning teenagers, flying above a world which was strange (never ever, gentlemen, has anything that was not strange managed to keep my attention for long), a world that was strange and beautiful. 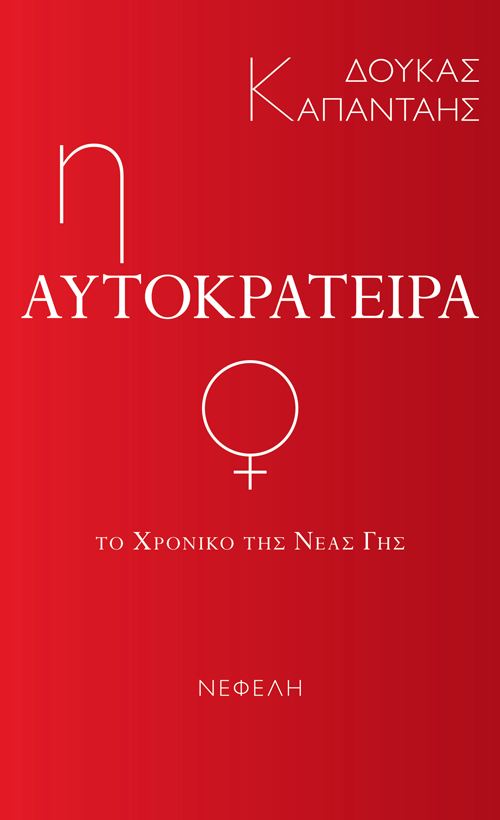 Doukas Kapantaïs
The Empress
a novel

The Empress (I Autoktrateira) was published by Nefeli Publishing in 2012. It is now in the process of being translated into English by Alexander Mordoudack in collaboration with the author. In 2017, a chapter of the book was adapted for the stage by the Nova Melancholia group. Performances were held at the Onassis Cultural Centre in Athens, which has also funded the entire production. During all four weeks of the performances, the theatre was fully packed. See the link bellow:
http://www.sgt.gr/eng/SPG1737/?

Doukas Kapantaïs, 46, is the son of the famous Greek sculptor Vassos Kapantaïs (1924-1990) and the novelist Ismini Kapantaï (1939-). He studied philosophy at the Universities of Athens, Paris and Bern. He has two PhD degrees, one in History of Philosophy (Paris IV, 2000) and one in Philosophical Logic (Bern 2007). Since 2003 he works at the Research Centre for Greek Philosophy at the Academy of Athens. Since 2014 he is Research Director at the same Centre. He is mainly interested and most of his publications are about Ancient Ontology, Logic and Semantics, and Modern Mathematical Logic. Since 2014, he co-directs together with Giorgos Karamanolis (Vienna) the working group on Aristotle’s Prior Analytics of the Academy of Athens.

In 2014 he published the collection of sonnets Agorakia-Koritsakia (Boys and Girls) by Nefeli Publishing House. Poems out of this book have been selected for several Anthologies in Greece and abroad, including the Penguin Anthology of Contemporary Greek Verse, Austerity Measures, Penguin, 2016.